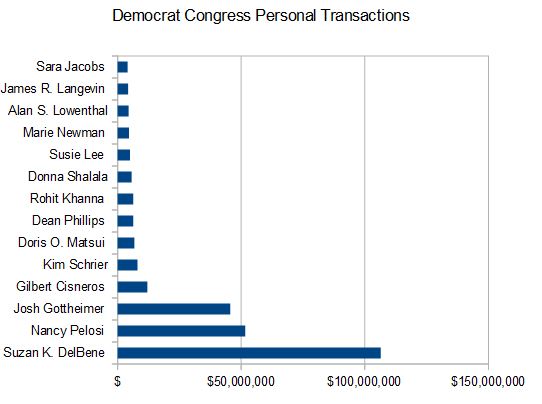 The amount of stock transactions made by our congressional representatives is truly mind boggling. Considering the salary is $174,00 per year you would expect to see a modest amount of investments. That is anything but the case. I gathered data from the forms required for congress people reporting transactions covering about the last two years and the numbers simply are staggering. I only looked at congress people who had at least 4 million in transactions, there were 24 on this list. There were many more with millions in transactions but I only focused on those with more than 4 million. The total stock traction’s of these top congressional traders (or should I say traitors) was over one half billion dollars since January 2020. The amount is about $530,623,435! If you would like to see the forms and data yourself you can find it here at https://housestockwatcher.com.

No matter how you slice it that is a lot of money. Especially when you look at their salaries. Of course some had outside businesses etc. but WOW. Those are big numbers. Here are some plots for transactions of each of the congress people.

A transaction can be a buy or a sell so of course this does not mean they have this much in assets. Also this is not their total net worth it is only the amounts that they trade. They also have houses, cars, etc. in assets. These trades to however give you a rough magnitude of the amount of money they control. When is the last time you traded over one hundred million dollars? Fifty million? Or a measly four million….of course the answer for most of us is never. One might even wonder how these people go so good at making the right trades to accumulate this level of wealth. Of course they would never have any inside information or know of a bill they were going to vote a certain way that would influence the value of some asset. So nice to see they are so focused on the people and America rather than accumulating wealth for themselves.

In any case, make of it what you will, the data is all there. Captain Obvious might say they had some help or influenced, others would say they were just really..really…really….lucky. I bet many of us wish we were that lucky.

America is not lost, listen to these young people.